Unable to Login? We are here - support@Marksupp.com
shopping_cart Cart (0 Items )
There are no items in your cart 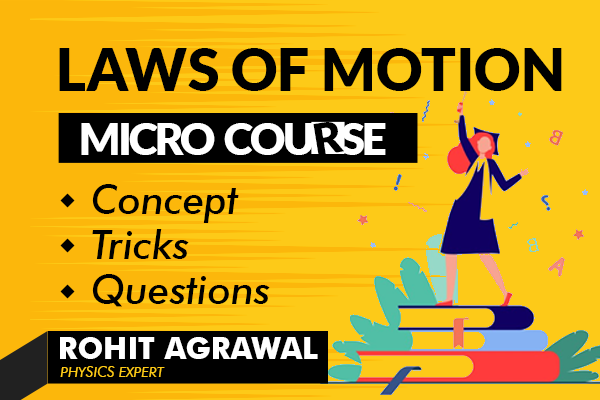 This Micro course is designed to help Learners to understand Laws of motion,

You will not only learn Concept,

Even Rohit Sir will Discuss Short tricks as well.

In this Micro course, Rohit sir have discussed More than 100+ Questions.

Rohit sir has a unique approach to teaching physics,

He understands the philosophy of Examiner and teaches in that style, which enhances the chances of success in exams.

From his full-year course Complete Physics, 42 questions asked out of 45 In NEET 2020,

in Jee Main, more than 15 Questions asked as it is from notes.

While Newton’s laws of motion may seem obvious to us today, centuries ago they were considered revolutionary. The three laws of motion help us understand how objects behave when they are standing still, when moving and when forces act upon them.
The first law of motion implies that things cannot start, stop, or change direction all by themselves. It requires some force from the outside to cause such a change. This property of massive bodies to resist changes in their state of motion is called inertia. Newton’s first law is also known as the law of inertia.
The second law of motion describes what happens to the massive body when acted upon by an external force. The 2nd law of motion states that the force acting on the body is equal to the product of its mass and acceleration.
The third law of motion describes what happens to the body when it exerts a force on another body.
When two bodies interact, they apply force on each other that are equal in magnitude and opposite in direction. To understand Newton’s third law with the help of an example, let us consider a book resting on a table. The book applies a downward force equal to its weight on the table. According to the third law of motion, the table applies an equal and opposite force on the book. This force occurs because the book slightly deforms the table; as a result, the table pushes back on the book like a coiled spring.Review Questions
1) While driving to work, Naveen always keeps his purse on the passenger seat.  By the time he gets to work, his purse would have fallen on the floor in front of the passenger seat. One day, he asks you to explain why this happens in terms of physics. What do you say?

We can explain this to Naveen in terms of Newton’s first law of motion. The purse due to inertia travels forward with the car until acted upon by another force, in this case, the force of the car floor.

2) Which of Newton’s laws best explains how a magician can pull a tablecloth from underneath dishes?
Newton’s first law of motion can explain how a magician pulls a tablecloth from underneath the dishes. A negligible horizontal force is applied during the process. As per Newton’s first law of motion, the dishes and glasses remain in their state of motion (rest); as a result, they remain undisturbed. The table cloth in the trick is made so slippery such that it doesn’t apply any frictional force on glasses and dishes.

After successful purchase, this item would be added to your courses.

You can access your courses in the following ways :